Today the City of Philadelphia and the Philadelphia Industrial Development Corporation (PIDC) announced an Emergency Relief Fund for Small Businesses affected by the COVID-19 pandemic. Some grants and no-interest loans are being made available. 24HrPHL’s Michael Fichman spoke with James Onofrio of the Commerce Department regarding some issues specific to independent artists, freelancers, and creative spaces/venues. We also learned about the application procedure.

Here’s is what you need to know about this program and how to apply if you are eligible:

If your Philadelphia business makes less than $5 Million per year in gross revenue, you are eligible. Even if you do not have a legal structure to your business, and you are a freelancer making 1099 income (aka “Schedule C” income) you are eligible to apply.

The City is prioritizing certain types of applicants. Here are their priorities, described on the application portal:

Even if you do not think you are a priority applicant, but you are eligible, you should apply. Freelancers and independent artists – this means you. This way the City can understand the type and number of people who need help and target subsequent programs to the right people. The City has been clear that they can re-shape the priorities to this program if need be.

To apply, you must provide a signed federal tax return and have a Philadelphia Tax Account number to complete the application. If you do not have a Tax Account, you can visit the City’s website to get one. If you are a business grossing more than $500k/year, you will also need to provide certain other financial documents. You will also need to complete a short written statement about how your business has been impacted by the COVID-19 pandemic and how you intend to use the funds to help your business recover.

Applications are being processed on a first-come, first-served basis. The people at the Commerce Department are working hard to process what they can, but you may not receive an immediate answer.

There are three sub-programs and they apply to three different categories of business. There is a single application and your eligibility is related to the gross yearly revenue of your business.

If you make less than $500,000/year in gross revenue, you are eligible for a $5,000 Microenterprise Grant. This is a grant. You do not have to pay it back. I believe it can be issued via Direct Deposit. This describes most freelance artists.

If your business has yearly gross revenue between $500,000 and $3 Million, you are eligible for a Small Business Grant up to $25,000. You will be required to show some of your books to demonstrate your cash flow needs and show proof of certain insurance.

If your business has yearly gross revenue between $3-5 Million, you are eligible for a no-interest loan of up to $100,000. with no collateral requirements You will be required to show some of your books to demonstrate your cash flow needs and show proof of certain insurance.

Good luck, and stay safe and indoors. Live stream a local DJ, drop money in the tip jar, and contribute to the funds for your local businesses’ GoFundMe campaigns.

24HrPHL needs your help. There are other resources for emergency subsidy that we are currently compiling, we are working on a survey to catalog the work and money lost in this crisis, and we need volunteers to help connect people to these resources. Please contact us at 24HrPHL (at) gmail (dot) com 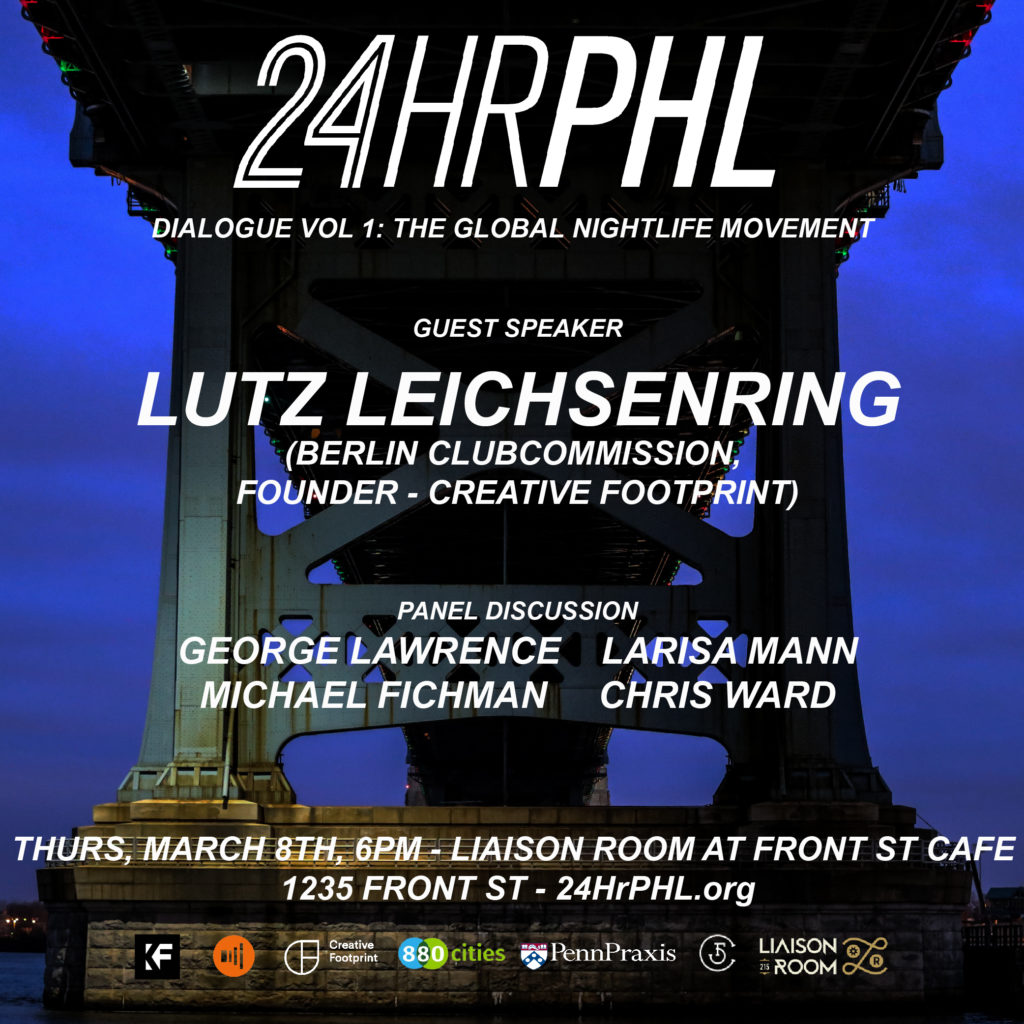 24HrPHL presents “Dialogues Vol 1: The Global Nightlife Movement.” Guest speaker Lutz Leichsenring is the excecutive board member of the Berlin Clubcommission and a global expert in protecting and promoting creative industries. He will discuss the political, economic and cultural issues affecting the sprawling and world renowned Berlin underground club scene. He will also discuss insights from consulting with nightlife leaders and city governments worldwide.

This conversation comes at a time of rising nightlife consciousness. Improving the way a city works after dark can eliminate the civic dysfunction that stifles creative, inclusive and vibrant industries. Making transportation, preservation, code enforcement, inclusion, safety and more work better at night improves a city’s competitiveness and improves citizens’ opportunities for expression and community.

Leichsenring will be joined by a select local panel – Chris Ward of Johnny Brenda’s and UArts, Temple University sociologist and Dutty Artz DJ Larisa Mann and Promoter and GL Agency Founder George Lawrence. The panel will be moderated by 24HrPHL’s Michael Fichman.

24HrPHL is a community engagement and informational resource project dedicated to supporting Philadelphia’s nightlife arts and culture community and articulating a vision for a better, more progressive Philly nightlife.

Lutz Leichsenring
Lutz is one of the world’s authorities on protecting creative industries. Since 2009, he has been the spokesman & executive board member for the Berlin Clubcommission. He has fought tirelessly for the rights of Berlin’s vast underground club scene by organizing demonstrations, conferences, workshops & by speaking at round tables & parliamentary committees. With his recently launched project Creative Footprint, Lutz measures, compares, & advocates for creative spaces in urban areas worldwide. He brings the answers, strategies & collaboration tools for upcoming promoters & grassroots venues.

Dr. Larisa Kingston Mann
Larisa is Assistant Professor of Emergent Media at Temple University. Her research examines how oppressed people use music to redraw the borders of spaces, communities and social relationships. As a DJ she has toured internationally and has organized events from block parties to raves.

Chris Ward
Chris is the talent buyer and promoter at Johnny Brenda’s and the former drummer of the band Pattern is Movement. He teaches music business courses at the University of the Arts.

Michael Fichman (Moderator)
Michael is the founder of 24HrPHL. He has been DJing, producing music and producing events for almost two decades – touring the globe and producing dozens of records under the names DJ Apt One and Michael The Lion. By day, he is a community organizer and an urban planning researcher and lecturer at the University of Pennsylvania School of Design 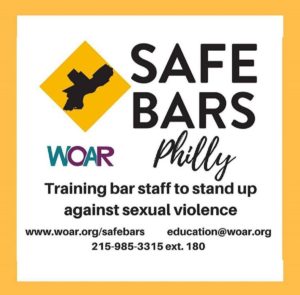 24HrPHL is partnering with Safe Bars Philly, a project of Women Organized Against Rape (WOAR) to facilitate staff trainings for local venues. Recently, WOAR staff member Leah Dirkse came to a 24HrPHL meet up to explain her program and learn about some of the needs and concerns of nightlife participants with regards to harassment and sexual violence.

A training with Safe Bars Philly will help your staff learn to identify harassment and other inappropriate behavior and respond safely and effectively. Staff trainings are inexpensive and also come with a certification that can be posted to inform patrons that the venue has been through the program. This program is new to Philadelphia, having recently expanded from Washington, DC.

You can learn more at WOAR’s website. To request a training, you may contact WOAR directly via their training request form or contact us at 24HrPHL at gmail dot com.

24HrPHL has learned that the City of Philadelphia intends to increase its enforcement of existing laws which prohibit posting signs on streetlights, utility poles and other surfaces. It is our understanding that the fines will accrue to the venue at which the posted event is taking place. Street flyering is a longstanding practice in Philadelphia music promotion, and as such, 24HrPHL is interested in making sure those in the nightlife arts and culture community are aware of the coming changes and can engage in dialogue with the City.

Here is some additional information from materials sent by the City:

Did you know that it is illegal in Philadelphia to post or pay someone to post a sign on a streetlight, utility pole, traffic sign, historical marker, or street tree?
Did you know that the penalty for posting these signs is $300 per sign for the first offense and up to $2,000 per sign for the second offense and that failure to pay or continued violations can result in revocation of your commercial activity license?